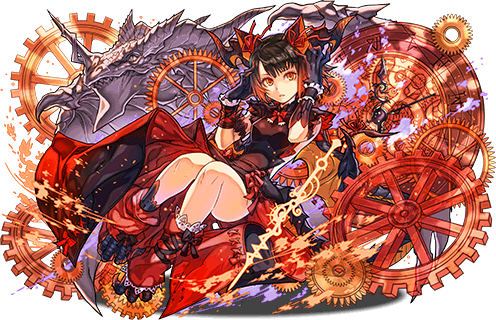 But… why did we want them again?

LHeradra on the left and RMyr on the right. 750k is a big investment so it’s good to understand what you’re getting into.

Less of an investment but… naturally… less return. The only one that really breaks that rule is Soprano.

Basically what Yomidra should have been, LHeradra features an HP boosting multiplier for gods and devils and a similar active skill but applied to lights, not darks. In essence, we can consider it a buffed Yomidra (given the time delay of NA getting it as well as the cost, it makes sense that LHeradra is a bit better) and as such treat it similarly for analysis purposes.

If you’re following along, this is 10x damage but a whopping 2x HP which is actually pretty big. Doubled up, you get 100x ATK and 4x HP for double LHeradra leads. Given a lot of dungeon’s tendencies to start hitting more and more damage nowadays, having this HP buffer can be pretty nice for dungeons. It also means that even if you pair with a lead that doesn’t give HP you still have a solid HP buffer. Knowing this, one of the first recommended lead pairings that I can make is light metatron (I know right?):

So you restrict yourself to God type only cards but now you have 2x hp and 2.5x RCV. Assuming enhanced orbs for LHeradra multiplier, you have the following scalings:

Keep in mind though, 2 crosses is significantly more annoying than matching only 1 cross or not even having to match crosses at all as would be the case when pairing LHeradra with herself or her second pairing, LEsch:

So essentially the same as LHeradra, and similar to LMeta you cut out devils (and can’t use machines which is included in LEsch leader skill). You get slightly higher damage, 120x, at the expense of 3x HP. Considering LEsch is bindable, I’m not entirely sure this is a great pairing besides having a card with insane amounts of OE for the team.

Condensed sub-pool (OE + decent everything else):

New Years Spica and Castor & Pollux columns with lots of OE. Having off-color OE can be nice for having enhanced orbs to convert off. They’re also double SBR which is nice for LHeradra.

New Years Leilan is super BAE and the only full board changer I’m listing.

Pollux and Alcyone are here for being double SBR while also having some OE. The actives are nice and low CD too with haste.

Myr is here because she’s an unbindable 1k weighted stat card that’s FARMABLE. Her active is not great for these teams so inheriting over would be required.

LEsch has a wonderful 7OE as the biggest increase in damage for the team possible. Along with her 1k weighted stats and strong light generation active, she’s a top tier sub for LHeradra.

Reincarnated Apollo has decent active and awakenings with a solid 1k weighted.

New Years Yomi has lots of TE, some OE and her active can be useful for enhancing orbs after a board change.

Allura has a decent active, like a mediocre Esch, and is unbindable. The devil killer can make it very difficult to deal with Parvati for A1-3 farming.

Scheat is the only god-type light attribute with FUA including all JP cards. Her active is fantastic for the team as well.

Paimon, with his splits coming, is insanely strong with 4OE, 2TE and FUA.

Ars Nova is really only here for the active and 4OE. Poor stats and otherwise meh but a short light generator that also enhances them, guaranteeing activation, is really nice.

As you can tell I don’t consider the sub-pool for the devils portion to be all that deep. Do consider that Paimon is an extremely strong sub for this type of team, so locking him out for the purposes of running LEsch / Metatron pairings might not be the best idea. If you’re running double Heradra than you’ll need a double SBR sub and then you’re kind of limiting your FUA to only Paimon split without hitting off-type or off-color.

Given all of this we can see multiple options to explore for each of the leads.

Should I buy her?

LHeradra is meant more to get through content quickly with a single 5 orb match getting you 100x while being able to tank successive non-gravity prempts. If doing long dungeons, expect to pair either with LMeta for the RCV (which makes matching a little less mindless given the cross requirement) or bringing high RCV / heart OE for sustaining the high HP given by the Heradra pairing. One of the nice things about Heradra vs LEsch is that LEsch with some OEs and a 5 match hits just over 1M damage while Heradra can control under 1M far more easily which helps against Vishnu and, well, Heradragon.

A very strong farmable card but unlike her LMyr and BMyr sisters, is much higher skill cap requiring a consistent 7c AND heart cross without the free 4 seconds. This is a difficult feat to pull off for a lot of players consistently in 6×5 boards.

Her best pairing is herself, flat out. The unique requirements make it hard to effectively match up with other leads (outside of 7×6). This gives her a self-pairing of 144x Attack, 9x RCV and 75% damage reduction for a full activation. But 7+ combos and shield can be hard to consistently activate due to orb requirements. A bit of math: A heart cross is 5 orbs used, leaving 25 orbs for your combos. 25 orbs left divided by 3, the minimum orbs for a combo, results in +8 combos and 1 orb remainder. That means 9c total is still possible with heart cross and good orb distribution (and that 1 remainder orb means that you could even get a TPA on an absolutely perfect 6×5 board). However, consider that each orb color can have up to 2 wasted orbs, leaving you with 12 wasted orbs on worst case scenario (5 colors and hearts). After your heart cross, you have 13 orbs that make 3 orb matches for 5 combos total including the heart cross, not enough to activate completely. RMyr still gets 64x Attack for this worst case scenario.

Alternatively, you can pair with 7×6 to give yourself lots of orbs to guarantee that you can always hit the 7c given 5 hearts.

Change the board to 7×6 size. All attribute cards ATK x8.5, 25% all damage reduction when reaching 8 combos.

Arguably the best 7×6 board changer. Unbindable like RMyr, similar activation (8c up from 7c full activation on RMyr) and one of the highest multiplier for 7×6 available.

Condensed sub-pool (OE + decent everything else):

Inahime in both her forms provides a great active. Her Non-awoken form in particular makes a great inherit for RMyr in terms of providing +2c and a tricolor board to work with which basically guarantees that you can activate outside of a truly horrendous board. Her awoken form gives her active a bind clear instead which isn’t as useful for RMyr and she lacks offensive awakenings.

Urd is one of 3 follow-up-attack (FUA) cards that you can run on-color for RMyr and her full board change is pretty useful. Her 7c awakening is nice, but she’s still bindable like the other norns. Has the lowest weighted stat of the group for FUA.

Glavenus has 3 TE to go with that FUA, unfortunately his active is worse than both Urd and Cotton. However, his near 1.2k weighted stat is a sight to behold.

Cotton is easily the best option here. Double 7c awakening to go with RMyr’s 7 combo requirement. The only unbindable of the three FUA options and an on point, 5 turn active to go with her insane 1k weighted stat.

Ney the absolute heaviest hitter that you can get for this team with 9x effective damage when hitting a TPA and 7c. She is unbindable and has a tricolor active with reds and hearts for easy activation of heart cross with combos.

Dantalion and Eldora both provide a very similar active and awakening set. Lots of OEs which can really boost your other subs’ damage and similar actives, 3 hearts + 3 fires and haste for Dandelion, +1c for Eldora. Pretty good cards to put on as OE slots.

Just a note that she has no sub-attribute which could hurt in unique situations where you need to ping. Also the Ney + Cotton sub-attributes can heal up a monster with light/dark absorb, notoriously MHera, should you skyfall that.

Should I buy her?

RMyr is meant more as a strong lead or fire sub for late and end game content. Unfortunately, her best sub is easily herself. TE, unbindable and on-point active. Remember Xiang Mei? A month after Xiang Mei came out in NA, she was completely overshadowed by Myr in JP. With the huge investment of multiple RMyrs, it’s a scary thought that she might get completely overshadowed (currently, we know about Dragonbound/caller REM which is incredibly strong but doesn’t offer any new MP monsters for you to save towards. If anything, one of the cards available in that special REM (Rii) could make RMyr stronger and still able to contend in the end game content. One on-going debate is the strength of shield mechanics versus straight HP / RCV multipliers. On one hand, there’s the fact that shielding (like in the case of RMyr’s 50% per lead) usually results in much stronger effective HP (RMyr is 4x HP and RCV effectively) while BHunter is 2.25x HP and RCV. On the other hand, that also requires you to meet specific requirements (like Diablos hitting 8c, RMyr needing heart cross) to get the shield.

She’s essentially only “decent” for her “farmable” tricolor board that has darks and hearts since her awakenings and stats are lackluster. But let’s take a quick look into how many cards have dark / heart tricolors. Oichi, Ishida, Ney, Apoc, Cecil, okay I think we get the point. What about fire/heart, her other combination? Urd, Verd, Beach Urd, Inahime, Saria, Kiriko, and probably more. As a permanent card that’s always available in the MP store, there’s no rush to get her on release, she will be there if you ever happen to need one of those board change combinations.

Overall, this is a nice set of cards to add permanently to the store alongside Dark Athena who is getting stale and can’t clear a lot of new content as fast as other leads (namely 3P UDR, Colo, A3, A2, A1, Alt Arena) but who still functions as a purchaseable inheritable delay. LHeradra and RMyr are good in their own respects as described above.

Want help building your own LHeradra / RMyr teams? Come join the Puzzles and Kupo Carry server by clicking the banner below! Kupo!

This site uses Akismet to reduce spam. Learn how your comment data is processed.

Join the Puzzles and Dragons Discord Server for more awesome guides! Or just chat with the dozens of end-game players about theory-crafting and team-building.

Do NOT follow this link or you will be banned from the site!